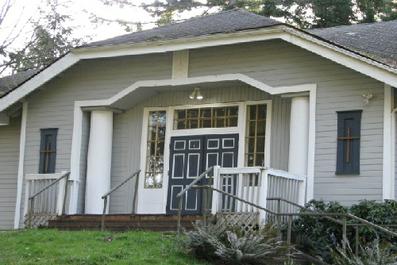 History of Our Building
Camas Bible Baptist Church was originally the Proebstel School which was located on NE 65th Street near Fourth Plain Road.  Unfortunately the school was destroyed in a fire.  The current building was constructed in 1919 at a cost of $6,500.00 and after the war became the American Legion Hall Post 205.

In 1974 the building was sold and sawed in half so it could be moved several miles southeast to the Fern Prairie area of Camas, WA.  If you look closely at the picture, you can see the line where it was cut in half.  On July 10, 1974 the American Modernizing Company of Vancouver moved the building to its current location at 3302 NE 242nd Avenue.  Here it became the Camas Bible Baptist Church.

Camas Bible Baptist Church was started in 1967, and we are in our 45th year of ministry to the community.  We are here to help you spiritually and look forward to having you visit us.